Your preference has been updated for this session. To permanently change your account setting, go to My Account
As a reminder, you can update you preferred country or language anytime in My Account
Email a Friend!

Your email is being processed.

Thorne Research, ResveraCel, 60 Capsules
By Thorne Research
Click to zoom
This product is either discontinued by iHerb or the manufacturer. Please search for similar products. 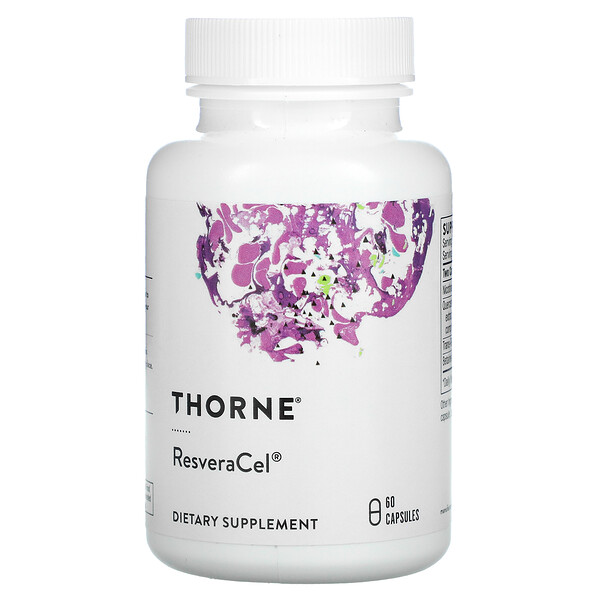 Target the effects of aging from the inside, out.

Thorne’s reformulated ResveraCel contains an all-new form of nicotinamide riboside (NR) that is exclusive to Thorne. Thorne’s proprietary NR, as nicotinamide riboside hydrogen malate, is bound to hydrogen malate salt. Because this salt has a heavier material weight than the NR salt used in the previous ResveraCel formula, it will change the amount of NR listed in the Supplement Facts box. And because the NR increased, we have also increased the amount of betaine in the formula, which will also be reflected in the Supplement Facts box.

Aging is a fact for every baby boomer and Gen-X’er. Although no supplement truly has “anti-aging” properties, ResveraCel comes close because it supports cellular repair, up-regulates the sirtuin proteins, enhances NAD+ production, and benefits the cellular energy production that takes place in the mitochondria – thus supporting the process of healthy aging.

Adding ResveraCel to your daily supplement regimen can make a positive impact on aging and support good health as you get older.

Take 2 capsules one to two times daily or as recommended by your health-care practitioner.

Tamper Evident: Use only if bottle is sealed. Store tightly sealed in a cool, dry place.

If pregnant, consult your health-care practitioner before using this product.

While iHerb strives to ensure the accuracy of its product images and information, some manufacturing changes to packaging and/or ingredients may be pending update on our site. Although items may occasionally ship with alternate packaging, freshness is always guaranteed. We recommend that you read labels, warnings and directions of all products before use and not rely solely on the information provided by iHerb.